Bantu people might have decided or might have often been forced to move away from their initial settlements by any one or many of the following circumstances:

Overpopulation, exhaustion of local resources and increased competition resulting from the first two causes go hand in hand. Whenever a settlement became overpopulated some individuals, some adventurers or some groups of individuals would decide to leave it in order to find more life space or better living conditions somewhere else. The same situation would apply when a population exhausted local resources such as water, grazing land, forest and others.

Sometimes individual group members or a group as a whole would voluntarily decide to face the unknown in order to explore what good fortune they might come across.

Sometimes, people were forced to migrate regardless of their own will. Such desperate situations could result from tribal rivalries or family conflicts, climate change affecting crops, famine, epidemics and witchcraft.

Though Bantu people were originally hunter gatherers, they later adopted a sedentary lifestyle  by becoming mainly agriculturalists who successfully grew various crops such as millet, sorghum, dry rice, beans, oil palms, melons, taro, banana, yams and others. However, their agriculture was for their own subsistence since they grew only sufficient crops to meet their own needs. Moreover, the origin of their iron-smelting technology remains a mystery since it not known whether they developed it locally and independently or it was introduced by the Phoenicians who are believed to have been in contact with them or the Egyptians or (still much closer) the Kushites[1].

Bantu people spoke related varieties of Bantu languages that are said to come from a common ancestor language called ‘Proto-Bantu’. The iron tools they acquired by mastering the iron-smelting technology improved their agricultural crops which allowed their populations to grow thus creating shortage of vital space. Their iron weapons made them redoubtable military opponents. From hunting they also learned to domesticate and herd animal such as goats, sheep, and cattle to name only a few. They also became crafted potters, and weavers as well as thriving traders, exchanging such goods as salt, copper and iron articles as well as ore/minerals for things that they needed. Politically, their groups became bigger and stronger because of their hospitable spirit and they later prospered, forming impressive regional kingdoms (e.g. the Kingdom of Buganda, the Luba Kingdom, the Lunda Kingdom, the Kongo Kingdom, the Zulu Kingdom and many more) by mixing with other groups by intermarriage and by integrating smaller groups thereby granting them protection against attacks by other groups and sometimes against slavery.

What genomics reveals about Bantu Migrations and Slave Trade

During a wave of expansion of people in Sub-Saharan Africa that began 4,000 to 5,000 years ago, Bantu-speaking populations – estimated today as reaching some 310 million people – ‘gradually’ left their original homeland of West-Central Africa and travelled eastwards and southwards in the continent. A genomic study conducted by the “Institut Pasteur”, the CNRS[2] and a broad international consortium using a huge amount of data (of over 2,000 samples) collected from individuals in 57 populations throughout Sub-Saharan Africa managed to retrace the persistently controversial migratory routes of these populations. Their research revealed that the admixture that occurred as a result of successive encounters of Bantu people with local populations was very much beneficial to the Bantu in that it made them genetically stronger. It enabled the Bantu people to acquire genetic mutations[3] that helped them to adapt to their new environments. A further analysis that was published in the Journal of Science of May 5th, 2017 based on the genomes of more than 5,000 Afro-Americans, managed to identify the genetic origins of African populations deported as slaves in North America and confirmed that they originated from the coastline stretching from Benin to West-Central Africa.

The mastery of iron-smelting technology which led to the emergence of farming some 4,000 to 5,000 years ago marked a turning point in the history of Africa. Equipped with this new technological advance, Bantu speakers started leaving their homeland in the region between Cameroon and Nigeria, to gradually spread eastwards and southwards to new areas. This is how their millennia-long journey which led into their settling in Sub-Saharan Africa started.

In an attempt to answer the question of the exact migratory route taken by Bantu peoples, researchers were divided between two hypotheses. The first theory known as "early split" claimed that the Bantu populations immediately divided into two groups on leaving their homeland, one heading east and the other one south. The second hypothesis proposes a "late split" by suggesting that Bantu speakers actually began by traversing the equatorial forest (today part of Gabon), before dividing into two migration waves, one continuing south and the other heading to East Africa.

A research team from the ‘Institut Pasteur and the CNRS[4] led by CNRS scientists Etienne Patin and Lluis Quintana-Murci in close collaboration with several African[5], European[6] and American[7] institutions were involved in a research study using genomic data from 2,000 individuals from 57 populations throughout Sub-Saharan Africa to try and answer the foregoing question. These scientists’ research revealed that populations of Bantu speakers from eastern and southern Africa are genetically more similar to those based south of the equatorial forest as compared to those to the north. On the basis of the data used, this study therefore clearly supports the "late split" theory according to which the Bantu first crossed the equatorial forest before branching off in two groups following migratory routes towards eastern and southern Sub-Saharan Africa, where they came into contact with indigenous populations inhabiting these regions. 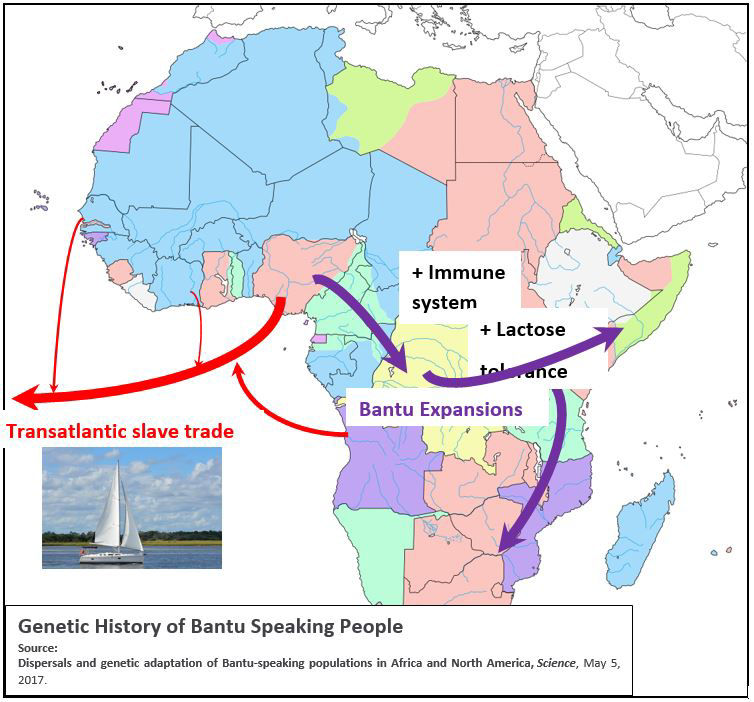 These scientists went farther with their research and proved that in their migrations, Bantu speakers admixed with the local indigenous populations over the past millennium. The Bantus admixed for example with pygmy populations from West-Central Africa, Afro-Asiatic-speaking populations from East Africa and San populations from South Africa. Unexpectedly, these successive admixture events turned out to be beneficial for the Bantu peoples by conferring them important genetic mutations that helped them adapt to their new environments. From the pygmies, for example, Bantu peoples acquired immunity to infections. Moreover, when the Bantus arrived in eastern Sub-Saharan Africa, the local populations passed on to them the gene that codes for lactase to enable individuals to continue digesting milk in adulthood.

This vast genomic study was also important in solving the question relating to the origins of the African American people in the most painful periods of African history, the transatlantic slave trade. It has proved that the genomes of African-Americans living on the North American continent today are 75-80% of African ancestry. In order to reach this important discovery, the scientists compared the genomes of nearly 5,000 African-Americans from across the United States with those of African populations currently living in the former slave ports. This enabled them to separate the contributions of each of these slave trade regions in a detailed manner: (i) nearly 50% of the genome of African-Americans is from the ports located in the Bight of Benin, (ii) almost 30% is from West-Central Africa (Gabon and Angola), and (iii) finally, 13% comes from the former port of Senegambia (the basin of the Senegal and Gambia rivers) and 7% from the Windward Coast (Ivory Coast). These results highlight the heavy toll that the transatlantic slave trade took on the Bantu populations.

While resolving the question of Bantu migratory routes this research also proves how beneficial Bantu admixture with indigenous population was for their adaptation to the environment, especially in terms of immunity. Genomics has greatly contributed to the history of our species. It is a powerful tool that can be used in conjunction with new pan-genomic approaches to reconstruct the history of our migrations and population mixing, and to identify the evolutionary mechanisms that have enabled us to adapt genetically to environmental pressures, including those exerted by infectious agents.

[1] The Kushite Kingdom whose capital was Meroe was also known in the 5th century CE as Aethiopia.

[2] The “Centre National de la Recherche Scientifique” / National Centre for Scientific Research is among the world's leading research institutions. Its scientists explore the living world, matter, the Universe, and the functioning of human societies in order to meet the major challenges of today and tomorrow.

[3] From the admixture with pygmies, for example, Bantu peoples acquired a new form of the HLA system, which helps trigger immune response to infection. Another compelling example indicates that when the Bantus arrived in eastern Sub-Saharan Africa, the local populations passed on a variability associated with the gene that codes for lactase, which enables individuals to continue digesting milk in adulthood.